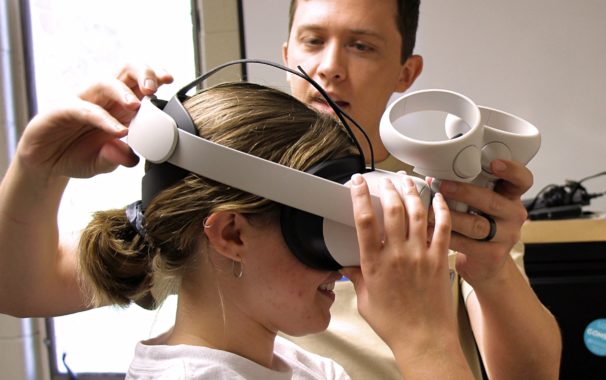 While invented in the late 1950s, virtual reality technology is at a new level of cultural awareness thanks to the accessibility of personal VR systems like Oculus and Meta’s creation and promotion of the virtual “Metaverse.” Assistant Professor of Cognitive Science Jared Branch, Ph.D., is utilizing VR technologies at Avila University to understand how the human mind engages with stimuli, real and virtual. He says creating an immersive social network is the latest step in virtual reality development.

“A big thing during the pandemic was people were visiting places–museums, monuments, even cities–using virtual reality,” Branch said. “People can take trips, and because there is a feeling of embodiment, you feel like you’re actually walking through these places, and you are actually there.”

Cognitive Science, the interdisciplinary, scientific study of the human mind, has grown in prominence in recent decades as technology became sufficiently advanced to mimic real-life situations. Utilizing principles and techniques from psychology, philosophy, neuroscience, and others, researchers analyze how the brain learns, processes information, and creates logic–in short, every conscious and unconscious process takes place in the human brain.

Event recall drives much of Branch’s research, specifically memory, mind wandering, and counterfactual thinking. Counterfactual thinking occurs when you actively imagine something different than what you observed. For instance, if you are in an accident and you go over the steps, you could have taken to avoid the accident. It’s possible we begin to forget or misremember what happened when we think about how events could have played out differently.

The outcomes of Branch’s research are wide-reaching. The cognitive decline caused by diseases such as Alzheimer’s could potentially be mitigated through immersive memory exercises. Fears like public speaking could be confronted through immersion therapy in a safe, virtual speaking environment. They address misremembered events or details through immersive, photorealistic recreations of the instance in question.

Members of Branch’s Lab play an active role in his research. Shelby Phillips, an undergraduate from Blue Springs, is interested in the impact of technological progress on her generation. The rise of social media platforms and how they affect and change humankind’s communication ability interests her in particular.

“I was born in 1995, so I’m part of a generation that partially grew up with the internet as we now know it,” Phillips said. “Technology has advanced so quickly and continues to grow rapidly, and I became interested in how the massive amount of information we’re exposed to daily affects us cognitively.”

As a part of the research group, she assists participants with the virtual reality environment, collects and codes data, and analyzes the responses. She said working under Branch has narrowed her research focus, and she is now considering her options after she completes her bachelor’s degree. A recent career fair organized by Branch provided Phillips with an opportunity to speak with small and large firms looking for designers and analysts who specialize in fields directly tied to cognitive science.

“Dr. Branch has given me exposure to so many different areas of study, and that has helped me draw connections between the things that interest me,” Phillips said. “There’s so much to research, and he helped me hone in on different areas. It’s given me a broad perspective of the field and numerous ways I could utilize these skills professionally, even if I don’t pursue graduate study.”

Branch’s lab is investigating the mental processes behind daydreaming and mind wandering. This research is focused on individual differences in mind wandering. For instance, the lab is gaining a better understanding of what type of person mind-wanders to the counterfactual past. “It seems to be associated with poorer mental health outcomes,” Branch said. Ultimately, cognitive science allows him the framework to begin understanding how our minds work and why.

“By identifying the areas of our brain that activate when we time travel mentally, we start to better understand how free association works,” Branch said. “It can give us insight into how our thoughts string together, which presents exciting possibilities for boosting human creativity. It’s still early, but we have seen that once you activate those areas attached to mental time travel, people are more creative. Now we’re seeing how to make that a possible reality.”