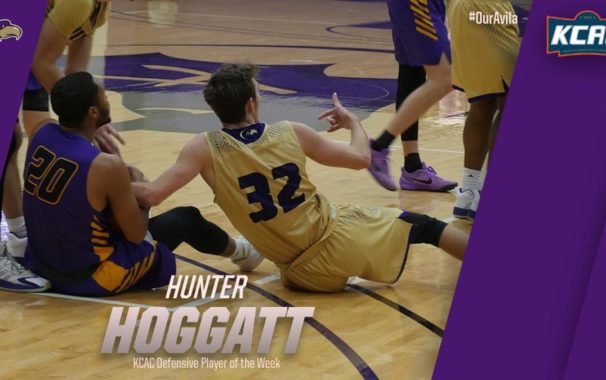 A key piece of the defensive puzzle in a two more victories for Avila men’s basketball this past week, Hunter Hoggatt has been named the KCAC Defensive Player of the Week for the week of December 14-20, the conference announced Monday.

The freshman guard from Sapulpa, Oklahoma has been one of the Eagles’ most consistent and most dynamic offensive players this season, leading the team and placing ninth in the KCAC with a scoring average of 16.6 points per game. But this week Hoggatt was a key contributor on the defensive end, as Avila held both Kansas Wesleyan and Sterling to under 70 points and won twice inside Mabee Fieldhouse in Kansas City to run its win streak up to six straight games.

It’s the first career weekly conference honor for Hoggatt, and the first for Avila men’s basketball in the 2020-21 season. It’s also the first weekly honor for the program since Eric Smith Jr. was named KCAC Defensive Player of the Week in December 2019, almost exactly a year ago.