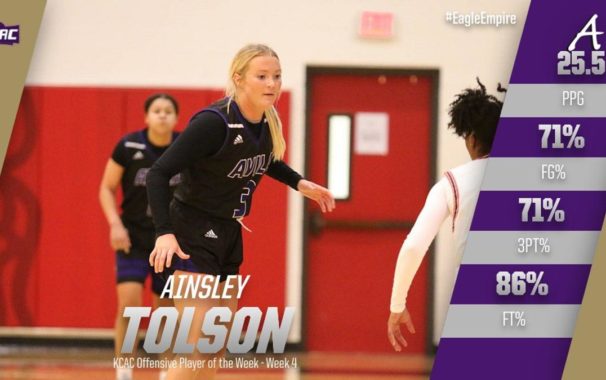 She’s had a killer start to her career in Kansas City, and after her best week of competition yet, Avila women’s basketball sophomore guard Ainsley Tolson has been named the KCAC Offensive Player of the Week for the week of November 22-28, the conference announced this week.

The sophomore from Trenton, Missouri has been excellent in her first season since joining the Eagles from William Jewell, leading the team in scoring with an average of 18.1 points per game over her first seven contests. She burst onto the scene with a 35-point outburst in Avila’s second game of the season against RV Benedictine, but she had her best pair of games of the campaign this past week to secure her team’s first weekly conference honor of the season.

Tolson started her week by dropping 25 points on 9-of-13 shooting in Avila’s road win over McPherson on Tuesday, then one-upped herself by scoring 26 on 8-of-11 shooting to lead the Eagles past Oklahoma Wesleyan at Mabee Fieldhouse on Saturday. She led the team in scoring and in field goal shooting in both games, shooting 71% from the field, 71% from three (5/7), and 86% from the line (12/14) over the two contests.

The point totals were impressive enough to snag this award, but Tolson also came through when her team needed her most this week. After Avila as a team rallied back from down double digits in the second half to force overtime against the Bulldogs, the Eagles ran into another challenge: three of their starters fouled out of the game in the extra session, leaving Tolson as the only available offensive mainstay. She answered the call, scoring nine of her 25 points in that five-minute overtime period alone, propelling her team to an impressive win.