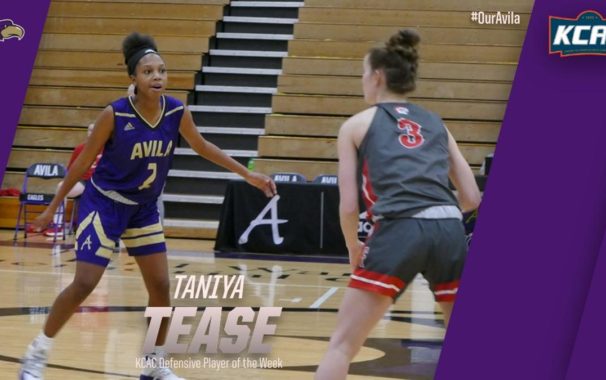 After two career defensive outings in a pair of Eagle home games, Taniya Tease of Avila women’s basketball has been named the KCAC Defensive Player of the Week for the week of December 14-20, the conference announced Monday.

An offensive mainstay since game, the first-year guard from Tulsa, Oklahoma was strong as usual on the offensive side of the ball in a pair of home games against Kansas Wesleyan and Friends inside Mabee Fieldhouse this past week, averaging 14.5 points, 4 rebounds and 2.5 steals while shooting around 36% both from the field and from beyond the arc.

But it was what Tease produced on the defensive side against the Coyotes and Falcons that was most impressive. On Monday against KWU, Tease ripped away a career-high five steals as well as a block, then followed that with three more steals and two blocks, tying a career high, on Thursday against Friends. On the week, Tease netted a total of eight steals after she had tallied only 11 over her first seven games, to go with a total of three blocks after she had netted just two over those first seven games.

It’s the first career weekly conference honor for Tease, and the first of the 2020-21 season for Avila women’s basketball. It’s also the first weekly honor for the program since Kassidy Snowden was also named KCAC Defensive Player of the Week in Week 12 of last season back in January.