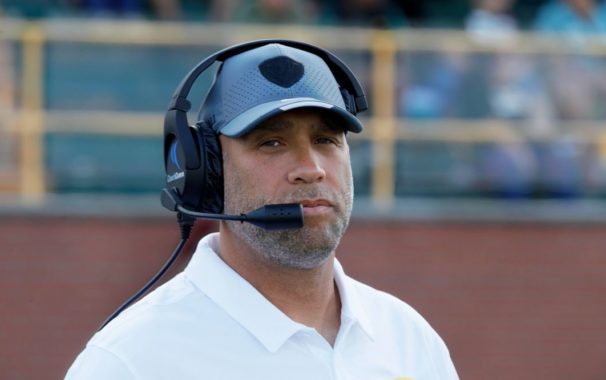 “We are very excited to welcome Derrick back to Avila University as our head football coach,” Avila University Director of Athletics Shawn Summe said.  “Derrick has the personality, work ethic, and football knowledge to continue to grow our football program, but more importantly is committed to helping our football players grow off the field as much as on the field. Derrick really impressed everyone he spent time with at Avila with his genuine approach to coaching and leading young men.”

“I am ecstatic about the opportunity to be a head coach,” Alexander said. “I have so many things that I want to do, but I know it’s going to take time. I am ready to get to work!”

A collegiate standout at the University of Michigan, Alexander was selected in the first round of the 1994 National Football League draft by the Cleveland Browns. He spent a decade in the highest level of professional football, including four seasons with the Kansas City Chiefs.

In 2000, Alexander was awarded the team’s Derrick Thomas Most Valuable Player Award and nominated for the NFL’s prestigious Walter Payton Man of the Year Award. During his first two seasons with the Chiefs, he formed the “Derrick Alexander Foundation” supporting Solace House, and raised more than $100,000 through his “Catch and Care” program.

Even after the conclusion of his playing career, Alexander has stayed closely connected to Kansas City, where his family has resided for more than two decades. Alexander has been part of the Chiefs Ambassadors since 2009 and was selected for the NFL’s Bill Walsh Diversity Coaching Fellowship for three straight years, which enabled him to ply his trade as an assistant coach during training camp.

Alexander joined the coaching staff at Avila University in 2016 as an assistant coach and pass game coordinator. In his three seasons at Avila, he also served as the wide receivers coach, academic coordinator, and director of football operations.

Alexander returns to Avila after spending the 2022 season at Wayne State University in his hometown of Detroit, following three seasons at NCAA Division I Morgan State University in Baltimore. Alexander takes over an Avila football program that has won two KCAC championships in three seasons and, in 2022, won a program record of ten games, qualifying for the NAIA Football Championship Series for the first time in team history.

“In my final season as an assistant at Avila, we were 7-3, which was the best record in school history (at the time). I am fortunate to be taking over a team that has just won the conference and made its first playoff appearance. I am looking forward to keeping the momentum going,” Alexander said.

Avila football will begin the Alexander era on August 26, 2023, against Bethany College before their first home game on September 2, 2023.