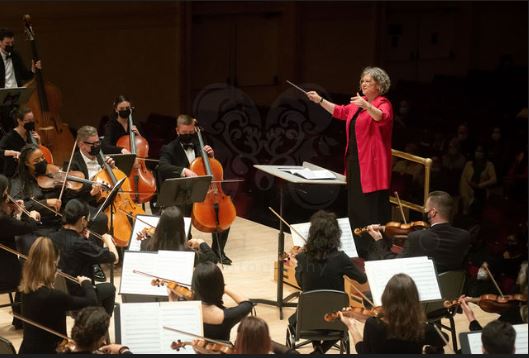 Carnegie Hall called, and Avila Chair of the School of Performing Arts and Professor of Music Amity Bryson, Ph.D. answered. Bryson was invited to this residency opportunity in 2021 with the promise that she would bring 75 singers to Carnegie for the showcase concert. Her background of excellence in music and leading Avila’s programs to reach their highest potential made her a standout candidate for this esteemed opportunity.

“The difference between this performance and our European tours/festivals is that I was chosen to perform. Normally Avila and my choirs are the invited performer. This honor is a pinnacle of my career and one I have worked very hard to achieve despite challenges and limitations. When we compete as a choir, there is no ‘Division II’ or conference like in athletics—we have to compete against major institutions with resources and numbers unimaginable at Avila. In this opportunity, my excellence and expertise in my craft were recognized,” said Bryson.

Bryson had six months to find her choir and rehearse. She found her singers throughout the community and beyond. She selected current Avila students and singers from local high schools, two-year schools, and an impressive pool of Avila alumni. Many of the alumni singers are now music teachers themselves. “In essence, I created an Avila generational choir. I had alumni from 2010-2019. Two of them traveled to the Vatican with me in 2009, and a few traveled to Paris with me in 2019,” said Bryson. “I’m proud that all majors and degree programs are represented in our music programs. Sure, we have a lot of music majors, but not everyone is, and I think that’s special. That’s representative of who we are at Avila.”

Bryson faced many challenges, including people dropping out, finding and scheduling rehearsal time, singers spread out across the state, and all of the hurdles that the last two years of the Covid pandemic have created. She had to figure out how to create a cohesive body of singers that would perform on one of the world’s most prestigious stages. She spent hours holding Zoom and in-person rehearsals with groups of singers and set up pen pals so the singers could get to know one another personally. “I’ve been to these joint-choir showcase events before, but this was the first time I was invited to be the conductor. It was a big deal, and I was very excited. It also meant figuring out all the challenges of building a choir virtually,” said Bryson.

After rehearsing for months, the entire group traveled to Carnegie Hall on May 24th, 2022. They had four days of rehearsals as a group. The 85 singers that Bryson recruited joined the second group of singers to meet the 150 minimum that would perform together. This was the first time her 85 singers and the group of 150 had rehearsed together as one vocal body. Bryson felt it went smoothly because she had put in the time and effort to get to know the singers individually and taught them how to become one choir. “It was really special to get them all together to have that common experience and share music,” said Bryson.

Three groups of 150 performed in Carnegie Hall on May 27th, 2022. Bryson was one of six conductors and the only female to take the stage that evening. Her leadership and charisma commanded the attention of the room. “To continue the athletic analogy—sometimes we leave it all on the field—I certainly left it all on the stage.  This was a performance I am incredibly proud of, and it will inspire me deeply as I continue to grow and build Performing Arts at Avila,” said Bryson.

She conducted “Light Beyond Shadow” by Dan Forrest, chosen for the focus on a piano solo, performed by Avila faculty member John Livingston, and

“Conciliation,” was explicitly orchestrated for this performance by Missouri composer Tom McKenney, Ph.D. The original piece was composed for a choir, but at Carnegie, it would be performed by a choir and orchestra. Bryson asked McKenney if he would be willing to orchestrate it, and he agreed. The performance at Carnegie was the world premiere of the piece. “Light Beyond Shadow is a piece about hope and the belief that things will get better. It felt like a very important message. One that we all need right now,” said Bryson.

“My ‘instrument’ is my ensemble, and the heart of this ensemble beats at Avila.  While this was a personal victory, I would not want to experience this without my Avila community.  Alumni who have traveled with me to Rome (in both 2009 and 2016) and France returned to take the stage in my ensemble.  Current students had the opportunity to travel for performance after a three-year hiatus—this will inspire them as they return to campus this August and infuse the 2022-2023 ensembles with confidence and professionalism.  I am grateful every day to do what I love; my passion is a fire that will not be extinguished through daily challenges,” said Bryson.

Bryson teaches various music courses each semester, including applied voice. She has been instrumental in initiating a Bachelor of Music degree and revamping the Musical Theatre degree program within the School of Humanities and Performing Arts to offer programs balanced in technique and performance. Bryson conducts University Singers and Cyrene Inspiration (a women’s ensemble), the top two choral ensembles on campus, and men’s GLEE. University Singers have performed in Carnegie Hall and Festival Corale Internazionale di Roma; they have received invitations to perform at the Sydney Opera House, the Beijing Olympics, and the Salzburg Mozart Choral Festival in Vienna in 2011. Her singers returned to the Festival Corale Internazionale di Roma to perform a summer tour of Italy in June 2016 and were named Outstanding Ensemble of the Paris Choral Festival in 2019.