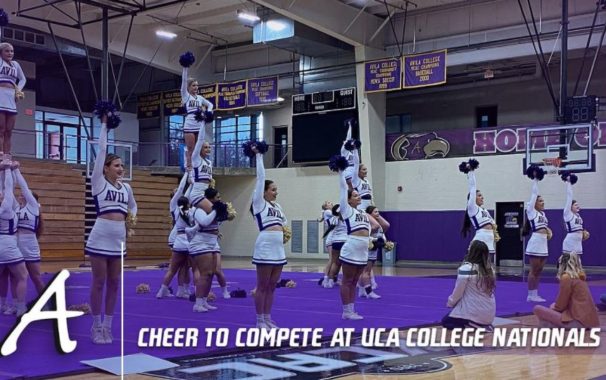 0.05. That was the point differential that separated first-place Pikeville and second-place Avila in the Traditional competition at last year’s Universal Cheerleaders’ Association (UCA) College Cheerleading National Championships. That was how close the Eagles were to the second national championship in program history. Just hours before Avila took second place in the Game Day competition with Sacred Heart edging the Eagles out by a margin of less than 0.6.

“You combine those and you’re talking about less than a point that separated us from two national championships,” said Avila Cheerleading Head Coach Melissa Shipman. “So this team is really, really hungry to win. But we as coaches have just tried to put them in the best possible position to be successful down there. You can go [to nationals] with the hardest routine but if you aren’t executing it well then it’s not going to matter. Our biggest focus has been just preparing them to feel confident whenever they walk out there on the mat.”

What’s waiting for the Eagles at nationals, once again, something close to normal (or as Shipman calls it, pre-2020) but not exactly. The number of teams competing in Avila’s two routines, Traditional and Game Day, is much higher than it was last year: Avila will be one of more than a dozen teams competing in 2022. In the Open All-Girl Game Day division are schools from all across the landscape of college athletics – from other NAIA schools and junior colleges all the way up to smaller NCAA Division I squads like Loyola-Chicago and St. Cloud State.

Also back after a year away is one of the most integral elements of any cheer competition: fans. All teams had to perform in front of sparse crowds a year ago, while many squads simply opted to perform virtually and not travel.

“It will nice to be back live with our parents able to watch, regardless of how we finish – it’s so nice to have your support system around you, and to hear your fans cheering you on whenever they call out how you place,” Shipman said. “It will be nice to just have fans cheering along with us, following our signs, following our flags. We’re naturally going to have more energy than we had last year.”

Living up to the legacy of the teams of Avila history, including the 2013 team that won the program’s first-ever national championship and earned a spot in the Avila Athletics Hall of Fame, is a core value of the Avila cheer teams of the present day. And now, almost every member of the squad that so nearly won the program’s second-ever national title a year ago is back to make another run at it.

“I know they have very high hopes considering how close we were last year, but for me, I just want them to walk off the mat knowing that they did everything they could,” Shipman said. “I know that sounds so cheesy, but at the end of the day, you can’t control what other teams have, the routines that they bring, the skills that they bring. You can’t control whether the other teams hit their routines or if they fall. You have no control over what the judges want to see. So all I want for them is to walk off the mat with a hit, knowing they did everything they could to prepare for that moment.”

There’s a sign in the Pavilion where the Eagles practice. There are only a couple of characters on it, but that’s enough to serve as a stark motivator and reminder of just how close they came one April ago: 0.05.