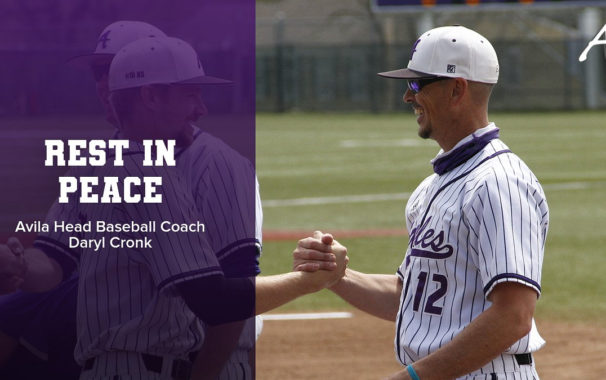 KANSAS CITY, Mo. – It is with great sadness that we announce that Avila University head baseball coach and assistant athletic director Daryl Cronk passed away at approximately 2 a.m., December 26, 2021. He was 46 years old.

“This morning was hard,” said Avila University Director of Athletics Shawn Summe. “Daryl was a great and genuine man. His ability to develop relationships with his players, coaches, and those he meets is a lost art today.”

A former All-American pitcher at Pittsburg State University, Pittsburg, Kansas, Cronk was one of the most invested and longest-tenured members of the Avila Athletics community, completing his tenth season as the head coach of the Eagle baseball team in May. He amassed more than 250 career wins in a tenure that included six conference tournament appearances and three NAIA tournament appearances since he became Avila’s head coach ahead of the 2012 campaign.

“There were conference championships and national tournament appearances but what was most important was all the lasting relationships he built,” said Summe. “Daryl created a culture of family within the Avila baseball program and that’s the most important thing a coach can do.”

Cronk passed away at University Hospital in Columbia, Missouri, surrounded by his friends and family. More details on how the family and the University plan to celebrate the life and impact of Coach Cronk will be released when they are available. Please keep everyone in the Avila University community, the Avila athletics department, and most especially the baseball team, which has withstood much adversity over the last 12 months, in your hearts and minds.

Coach Cronk’s family set up a GoFundMe page to help pay for medical expenses and to help care for all those who succeed him. Donations for the Cronk family are not expected but would be greatly appreciated.