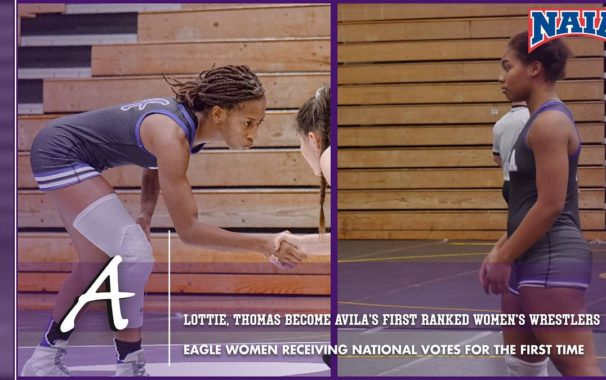 With the two ranked individual wrestlers also comes 11 team votes, meaning the Eagle women are now appearing in the NAIA’s team rankings for the first time in program history. Avila is one of 11 programs to be receiving votes in the third edition of the NAIA Women’s Wrestling Coaches’ Poll.

A first-year from Raytown, Missouri, Lottie kicked off her college career by winning her first two matches at the Falcon Invite and has been a rock at the 116 weight class ever since. Her victory over Ashley Tobe of Grand View, a top-15 wrestler in her class and a member of what was then the No. 1-ranked team in the nation, was the best individual victory for the Eagle women at the 2021 Eagle Duals and was Lottie’s fourth victory of the season. Lottie vaulted past Tobe in the individual rankings after that win, placing Lottie at #11 in the 116 class, the highest individual ranking in Avila wrestling history.

A first-year from Marshall, Missouri, Thomas also won her first career match at the Falcon Invite and picked up three wins, all by pin, at the 191 class over the first few months of the season before moving down to 170 for the Eagle Duals. Wrestling at a new weight for the first time, Thomas earned two more victories, both via forfeit, at Mabee Fieldhouse, and her only loss came to Elisa Robinson of Baker, the No. 4-ranked wrestler in her class. Thomas enters the Top 20 in the No. 20 spot, her first appearance in the individual rankings.

In the program’s inaugural season of competition, Avila Wrestling has now had two wrestlers from each team appear in the individual rankings, and the Eagles have only been competing for two months. Thomas and Lottie join Daryus Webb and Logan Johnson of the Eagle men among the national leaderboards at some point this season.