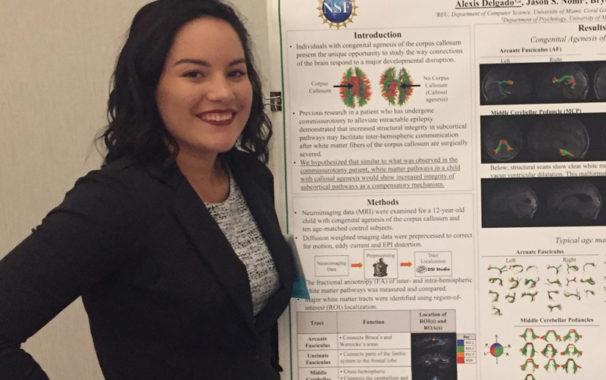 Alexis Delgado, a junior biochemistry premed major at Avila University, spent her summer break a bit differently than most of her classmates – she was crunching MRI data in support of cognitive neuroscience at the University of Miami as part of a “research experience for undergraduates”, or REU.

Recently, Delgado’s research featured at the Council on Undergraduate Research’s Research Experiences for Undergraduates Symposium on October 27-28 in Alexandria, Virginia. Her poster, “An Investigation of Congenital Agenesis of the Corpus Callosum”, competed alongside posters from undergraduate researchers at Harvard, Princeton, Yale and other schools in the National Science Foundation (NSF) Biological Sciences division.

Thanks to her work at Miami and KU Medical Center-where she works up to 20 hours per week assisting research-Delgado wasn’t intimidated by the competition. But when she was considering where she wanted to complete her undergraduate research, a large university did not appeal to her.

“I looked at KU and other larger schools, but I didn’t think I would like that experience,” she said. “I came to Avila because I wanted to go to a smaller school and the NSF research grant scholarship made it possible. Knowing my professors and being able to talk to them has made a big difference for me.”

For high-achieving students like Delgado, the NSF S-STEM Research Grant is an excellent opportunity to pursue advanced training in fields like biology, biochemistry and molecular biology, software engineering and computer science. Avila won the five-year, $650,000 grant in 2016, which primarily goes to scholarships for 16 STEM scholars, according to the grant’s principal investigator, Katie Burgess, Ph.D., assistant professor of biology. As Delgado’s academic adviser, Burgess has an up-close perspective on the former’s growth as a researcher.

“We were impressed by Alexis right away based off the research experience she had coming out of high school,” Burgess said. “She has been a great fit as one of our STEM scholars and has been so since she began attending Avila as a member of our first cohort.”

The REU gives undergraduate researchers exposure to cutting-edge scientific environments at top research institutions. At Miami, Delgado conducted research as a member of the Brain Connectivity and Cognition Lab at Miami, using data generated by MRI readings to analyze white matter, the material in the brain that allows the two hemispheres of the cortex to communicate. The research team investigated the plasticity of white matter by examining subjects born without it. Delgado said the results of the MRI scans shed some light on how your brain communicates with itself.

While she has not completed her studies at Avila, Delgado is already planning to attend medical school in an effort to earn her M.D., with a clinical focus. Especially interested in pediatric neurology, she wants to study rare disease and genetic disorders stemming from mutations affecting white matter. Because of the REU experience she had this summer, she feels more prepared than ever for the next phase of her studies.

“I didn’t know what project I would be given as part of the REU, so I got lucky that it was something that I was very interested in,” she said. “It was an excellent opportunity to learn a new software and how to read MRI data a little bit better than I had during clinical shadowing.”