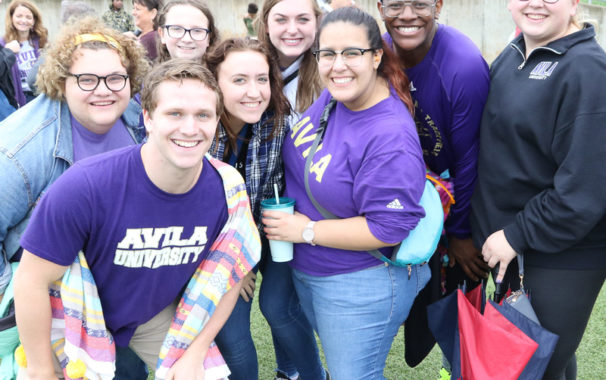 With a theme of “We Are Family,” the weekend of events began with the annual President’s Circle reception, held on Thursday, October 3 on the Jeanne Hamilton Olafson Plaza. The sun broke through after a cloudy day, and the University awarded Ken and Marilyn Hager and Christine Olije ’82 with the Avila Medal of Honor, the highest honor bestowed by Avila. Professor emeritus Robert Powell, Ph.D., received the 2019 Honorary Alumni Award during the ceremony as well.

Reunions filled the day on Friday, with the class of 1969 ringing in its 50th reunion year and Special Education alumni and faculty celebrated the program’s 55th anniversary. The day began however with the Heritage Day Mass and Luncheon, honoring the members of reunion class years and the University’s Heritage Society.

The Theatre Department held the first of two dinner theatre performances of War of the Worlds: The Panic Broadcast on Friday in Whitfield Center, welcoming parents to a prime rib dinner on one evening, with alumni and friends taking part on Saturday. In four performances, nearly 300 attendees were wowed by the department’s first production of the year.

Game day kicked off Saturday with the Athletics Hall of Fame Induction Ceremony, where soccer alumnus Mike Corrigan ’90 and former football player Kevin Furderer ’05 received individual honors and members of the 2011-12 Women’s Basketball team were recognized for their excellence on the court. A rainy day did not put a damper on the campus football tailgate and barbeque at Thompson Hall and McCarthy Observation Deck overlooking the Zarda Family Athletic Complex. More than 300 alumni, friends, students and families enjoyed Jack Stack Barbecue, a bounce castle, face painting and other activities. All in attendance cheered on the Eagles to an entertaining 51-38 win over Bethany College. With the volleyball and men’s and women’s soccer teams in action on campus, it was a packed weekend for Eagle athletics.

Avila closed out Homecoming Weekend festivities on Sunday with the annual Alumni Mass in the Orscheln Memorial Chapel, followed by the Alumni Awards Ceremony and Luncheon. Nine alumni were recognized for their immense service and contributions to the University their communities, with Bita W. Moghaddam ‘82, Ph.D., being named the 2019 Outstanding Alumnus.