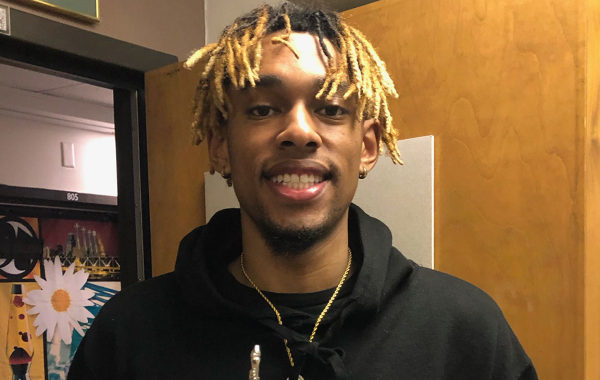 Senior Brandon Phillips earned the 2020 MarCom Platinum Award in January, the highest honor from one of the largest, most respected creative marketing and communication competitions in the world.

His submission, “Be You, Stay Strong,” aimed to raise awareness of and improving student mental health and esteem through a public service video campaign. Phillips originally created the video for a course two years ago, and when instructor J. Anthony Snorgrass—professor of communications and Director for the Center for Digital Advocacy—suggested he submit it for the competition, Phillips said the reaction from his fellow students in the School of Visual & Communication Arts (VisCom) gave him confidence.

“I was shocked and completely surprised when I found out I’d won the MarCom Platinum Award,” he said. “Dr. Snorgrass is notorious for making students come out of their comfort zone and help unlock unknown creativity within them. He actually had to remind me that I’d made the video because it had been two years since I’d produced it.

“When I thought back to when I first showed it, I remembered how cringey I felt watching the video in class in front of all my fellow students. I expected the other students would feel the same, but I couldn’t have been more wrong. When the video ended, to my surprises, the class roared in applause and (Snorgrass) had a proud look on his face.”

Directly addressing the camera, Phillips reflects on lessons he learned while participating in sports, especially basketball. The leading scorer for the Avila Men’s Basketball team, he discusses his love of basketball and its positive impacts in his life. He then contrasts the two types of players he sees on the court—the “loud player” who is trying to intimidate and do anything to win, and the “patient player” who reads, reacts and acts with intention. He closes by asking which sort of player you want to be in life.

“I drew a lot of inspiration from past experiences, moments that were impactful and meaningful in my life. I used to be that ‘loud player’ and it took time and maturing for me to become that ‘reactive player’. It wasn’t until I got older that I learned the final message in the video: ‘And just because you miss shot, doesn’t mean you’re a bad player.”

Administered by the Association of Marketing and Communication Professionals (AMCP), the awards recognize outstanding achievement by professional in the field. Up against work from corporate marketing and communication departments, advertising agencies, public relations firms, design shops, production companies, and freelancers, Phillips’ campaign was among 17 percent of more than 5000 entries to receive the top prize.

“’Navigate Our Turbulent Times’ served as the focus for this year’s MarCom Awards, and Brandon’s work was a direct message to students whose self-esteem and sense of self may be challenged by the unrest caused by COVID-19 and racial justice protests,” said J. Anthony Snorgrass, professor of communications and Director for the Center for Digital Advocacy. “VisCom and its faculty stress the importance of professionalism in our students’ work—Brandon’s work is certainly exemplary of this standard and I am proud of his commitment.”

Phillips, a Communications major with a concentration in Marketing who plans to graduate this year, said he is looking to begin a career utilizing his skills in media design, video editing and music composition following his graduation.

“The recognition associated with winning an award of this stature, judged by industry professionals, is valuable both in raising one’s profile while seeking employment and in starting one’s career,” Snorgrass said. “I’ve always believed and stressed that student work doesn’t have to look like, feel like, or sound like student’s work and that’s what we strive to accomplish in our program.”

Phillips’ MarCom Award is the first Platinum Award in Avila history, according to Snorgrass, in addition to several Gold Awards and Honorable Mentions.

Click here for more information about the School of Visual and Communication Arts.