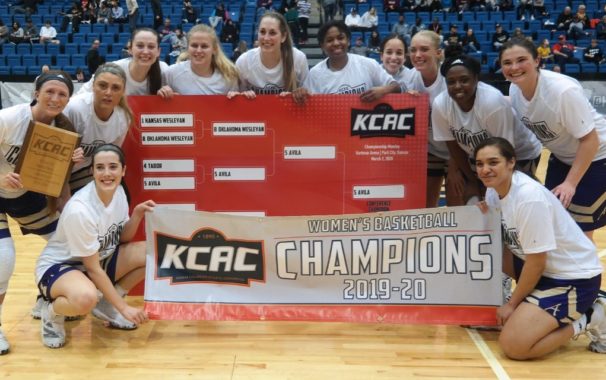 On Monday, March 2, 2020, Avila University’s women’s basketball team defeated the Sterling College Lady Warriors to win the KCAC Conference Tournament Championship. With the win, Avila returns to postseason play for the first time in eight seasons, qualifying for the NAIA Division II Women’s Basketball Championship, March 11-17 in Sioux City, Iowa. The last time Avila made the playoffs was the 2011-12 season; the last season of head coach Torie Murillo ’14 time as a player for Avila. The Eagles will learn their first-round opponent on Wednesday, March 4, as the bracket is announced by the NAIA.

Coming into Monday’s KCAC Championship game, Murillo knew that keeping the Sterling College offense contained would be the key to success for Avila, as the Eagles had allowed the Lady Warriors 90+ points in both regular-season contests. Their preparation paid off, as Avila (19-11) forced 22 turnovers en route to a 67-65 win over Sterling (25-8).

Just as in both of the regular-season matchups, Avila found itself trailing early in the contest. Sterling scored its first basket immediately off the opening tip, as Brooke Westrom won the jump but pushed the ball right into the waiting hands of Sydney Bangert.

And just like in the second meeting between the teams, Avila battled back to win the first quarter. A three-pointer from Matti Morgan off a feed from Nimo Samana gave the Eagles their first lead of the contest, a 13-11 margin with 3:21 on the clock. Sterling was able to answer with a basket on the opposite end, but Avila prevailed in the see-saw battle over the final moments of the first, taking an 18-16 lead to the first break.

Energized by the success, Avila came out with a stifling defense to open the second quarter, holding the Lady Warriors to just three points over the first five minutes of the frame. Avila extended to a 30-19 lead at the 5:06 mark as Kassidy Snowden picked the pocket of Bailey Bangert and raced the distance of the court for an easy lay-in.

Sterling finally found its range, but Avila was able to withstand the push and took a 39-33 lead into the break. Taylor Faulkner nearly gave the Eagles a nine-point margin at the intermission, launching a half-court effort as time expired, but it was just off the mark.

Avila missed its first two shots of the third quarter and Sterling was able to capitalize, tying the game at 39-39 with 7:08 to play. The Lady Warriors were able to answer a Paige Bunn three-pointer with four straight free throws to edge in front 43-42, but the Eagles wouldn’t trail for long.

Faulkner put the Eagles back in front with a quick bucket at the 5:26 mark, then snagged a rebound off a miss by Bangert and raced end-to-end, dishing to Snowden on the drive for a layup and a 46-43 Avila lead.

A quick four-point spurt gave Sterling a 47-46 lead, but the Eagles again answered to finish the third quarter with a 54-51 lead.

With 3:30 left in the contest, Avila found itself in a bit of a unfamiliar spot, as Faulkner picked up her fifth foul on a contested charge as she was driving to the basket. But on its next possession, Sterling was whistled for an offensive foul and Dani Rehor put Avila up 65-60 with 2:56 on the clock.

The final 60 seconds of the game were packed with drama, as Sterling’s Emmiley Hendrixson pulled the Lady Warriors within one, knocking down a trey off a Kylah Comley assist. Rehor wasn’t able to connect on her shot as Avila tried to whittle time off the clock.

Hendrixson pulled down the rebound, and as Sterling tried to hold for the last shot, Morgan fouled Hendrixson with 13.2 seconds to play.

Despite missing the first free throw, Hendrixson had a chance to tie the game at 66 with her second shot. It was ever so slightly off the mark and after hitting off both the front and back iron, it bounced back and stalled on the front of the rim.

Time seemed to come to a standstill as the ball hung on the rim for a full second, before falling into the crowd of players below. Westrom grabbed the ball and was able to hand it off to Morgan, who was fouled almost immediately by Sterling.

After hitting one of two shots, Sterling called a timeout to advance the ball with 10.0 seconds on the clock.

Sterling tried to find its hero of the moment, but Avila’s defensive pressure was stifling and Hendrixson’s rushed last-second three-pointer was off the mark and quickly grabbed by Snowden to preserve the win for Avila.

Both teams finished the night with impressive shooting, Avila hitting .473 (26-55) and Sterling hitting 22 of 44 shots. Faulkner was one of three scorers in double-digits for Avila with 19, joined by Morgan (15) and Snowden (11), while Hendrixson was the high scorer for Sterling with 17.

Avila made the most of its 22-12 edge in turnovers, converting 26 points off turnovers to just three for Sterling.