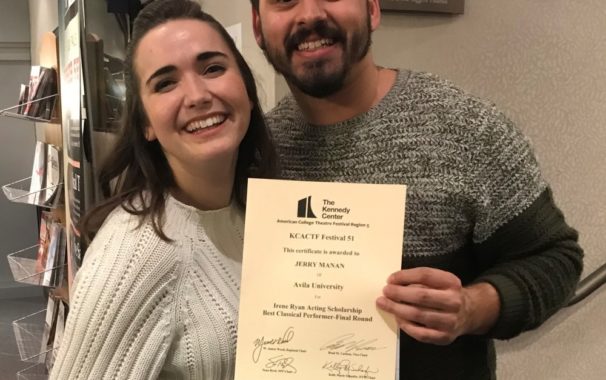 For three years, Avila University senior Jerry Mañan has traveled to the American College Theatre Festival’s Region V Festival to learn, perform and compete against actors from schools both large and small. The first two years, he walked away empty handed.

The 2019 Festival turned out a bit differently.

Mañan was named a finalist for the Irene Ryan Acting Scholarships prize, one of the most prestigious prizes for collegiate actors, just missing out on the national festival at the Kennedy Center in Washington, D.C. Additionally, he was named Best Classical Actor for his performance of a scene from “The Taming of the Shrew” by William Shakespeare. Mañan said the experience of the previous two trips prepared him and his acting partner, senior Bethany Elliot, on what to expect.

“It’s been cool to see the evolution of participating and performing at the festival,” he said. “Two years ago, Bethany and I made it to the semifinals in our first try. Last year, I didn’t get past the first round. The big thing for us this year was to be living in the moment. Advancing to the next round isn’t guaranteed, so we decided to enjoy the opportunity and have some fun while we were doing it.

“It was really big for us that we made it to the final, because it’s the final 16 out of around 300 competitors. In all the times we’ve gone to the festival, we know what it’s like to see the finalist perform for such a big event.”

The competition, which took place January 20 to 26 in Sioux Falls, South Dakota, was comprised of three rounds, with each having different requirements on the performers. In addition to his scene from Shakespeare, Mañan performed a monologue from “The Flick” by Annie Baker and another, contemporary scene from the play “The Mercy Seat” by Neil LaBute.

Due to his participation in the Italian travel course over the winter break, Mañan had a limited amount of time to prepare for his performance with his acting coach Matt Schwader Harbor, professor of theatre and director of performance studies at Avila. Compounding the challenge was the absence of Schwader Harbor from the festival. Mañan said he and Elliott had to think outside of the box in their preparation once they were at the festival.

“Most other schools had their acting coaches there, but because Matt had just had his baby and Dylan is more of a backstage sort of teacher, we were a bit on our own,” he said. “Dylan was a big help. But ultimately Bethany and I sat down and said, ‘We need to be here for each other and if we see something that needs to be adjusted or fixed.’ It’s kind of a no-no in the professional world, but given the circumstances, we needed to put that aside and do what was best in that situation.”

Next up for Mañan, a Kansas City, Kansas native who plans to graduate this spring, is a role in “Gulp” by local playwright Andrew Hagerty at the Squeezebox Theatre in Kansas City, Missouri. At the conclusion of that play, he has been cast in multiple roles in the Heart of America Shakespeare Festival production of “Shakespeare in Love” this summer.

Mañan said he is especially looking forward to that role because it will allow him to perform alongside his acting coach, Schwader Harbor, who is cast as the lead role of Shakespeare in the performance. The transformation of their relationship over the course of the past year has been exciting, Mañan said.

“With all of my professors, there is a kind of connection of friendship. I don’t feel like they’re my teachers – especially with Matt,” Mañan said. “I was speaking with him the other day and the festival came up. He told me, ‘You thought you were going to get rid of me.’

“Instead of a student-teacher relationship, it does feel like we’re turning into colleagues now. He’s become someone who I really trust with his knowledge and mentorship.”