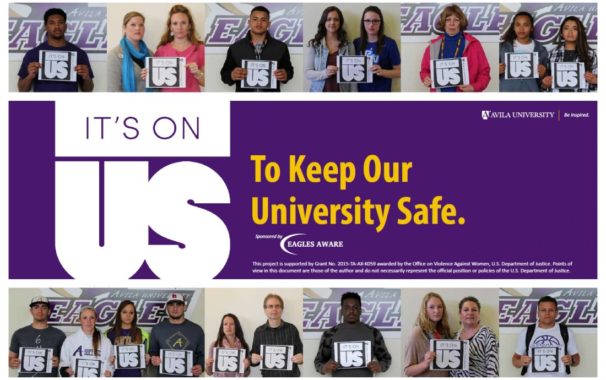 On Wednesday, August 29, 2018, the United States Justice Department’s Office on Violence Against Women (OVW) announced 57 grants totaling over $18 million to help campuses across the country reduce crimes of sexual assault, domestic violence, dating violence, and stalking. Avila University is one of only two Missouri colleges to receive these competitive grants. No grants were issued to institutions in Kansas.

For Avila University, this year’s award of $272,925 is a reaffirmation of the leadership role the University and the Eagles Aware program have taken. In 2015, Avila University was awarded a three-year, $299,000 OVW grant and established Eagles Aware on campus. Over the three years, Avila has become a leading campus in domestic and dating violence awareness and prevention. Having already received one OVW grant makes this year’s award even rarer. “The DOJ does not give many continuation grants,” said  Jessica Gerrity, managing director of McAllister & Quinn, a Washington, DC grant consulting firm. “Avila is always a leader and in the small percentage of schools that do the impossible.”

Each year colleges and universities across the country apply for the OVW grants to implement comprehensive, coordinated responses and preventative programs to violent crimes through partnerships with victim services providers and justice agencies.  “We’re thrilled and honored with the announcement,” said Sara Eckinger, program coordinator for the Eagles Aware program at Avila. “Dating and domestic violence, and stalking happen everywhere, on and off campuses across the country. With the limited amount of grant money available, this is tremendous for our campus and students.”

Thanks to the OVW award, the University will be able to expand the Eagles Aware program to reach more students and community members. The aim for this expansion is to increase campus-wide education and messaging by targeting outreach efforts for upper-classmen, disadvantaged students, athletes, the LGBTQ community, international students as well as adult learners.

With the majority of Avila students living off-campus, the Eagles Aware programs reach well beyond the campus as students take this information out into the greater Kansas City community. Over the last three years, Avila’s Eagles Aware program has been a leader on campus and in the community—working alongside the Kansas City Police Department, MOCSA and Hope House to eliminate and prevent violent crimes on campus.

“Creating and maintaining an environment free of harassment and discrimination based on sex is a responsibility that belongs to all of us,” said Eckinger. “Together, these crucial funds can help us create the kind of culture that makes it clear that we do not permit this type of behavior within our Avila community.”