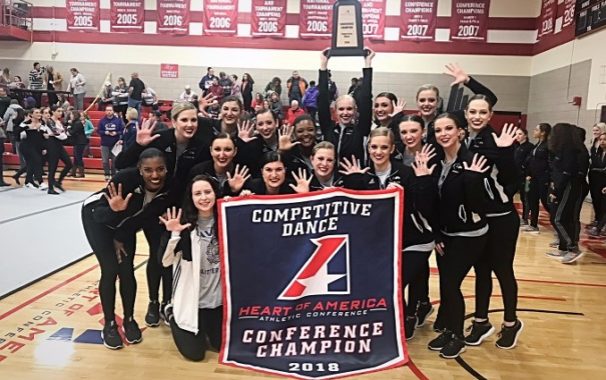 “I could not be more proud of what these ladies were able to accomplish,” head coach Cindy Freeman said of her team. “To come into today with a target on their backs, knowing this was likely the last chance for them to compete for a Heart Championship, I’m just so happy for them. This group deserves all the credit in the world.”

In what was the final competitive performance for the Glitter Girls this season, the team qualified for the dance finals in first place with a fantastic showing in the preliminary round. The Glitter Girls captured the title again in the finals, claiming the championship by 4.7 points over the second place finisher, host Grand View University.

With the win, the Glitter Girls extended their own record of consecutive Heart Competitive Dance Championships to five straight. The victory is possibly  the sweetest for a team that will not be competing in this event moving forward as Avila University is moving conferences next fall, switching to the KCAC.

The seniors on the squad (Lauren Hopper, Katlin Huskey, Jodi Johnson, Keirsten Ludwig, Shaelyn Matkins, Haley Pickert and Amber Woods) will forever be known as undefeated in the Heart. “The ladies really wanted to show that they belonged,” Freeman said. “Winning a fifth consecutive championship was very important to our seniors. They can now graduate knowing that they never once lost in the conference championship.”

Along with crowning champions in both cheer and dance, the Heart of America Athletic Conference also awarded All-Conference honors for the first time in 2018, with six Glitter Girls earning a spot on the All-Conference team. Those six individuals were Pickert, Woods, Matkins, Huskey, Ludwig and J’mia Cheadle.