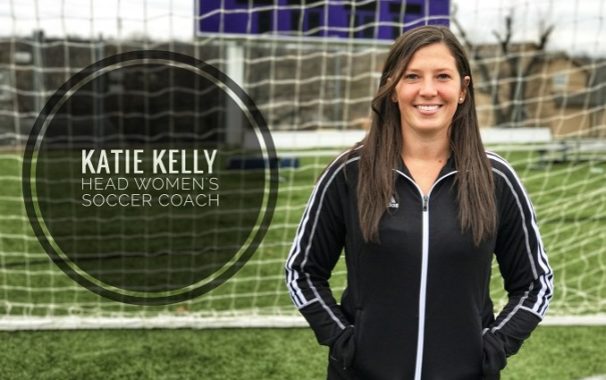 “We conducted an extensive search and had a very strong pool of candidates. Katie came on campus and had a plan in place to take the women’s soccer program to the next level,” Director of Athletics Cristina Cowan said. “It was clear to us that her passion for the sport is unrivaled, and her strong faith-based background and connections to Avila University made her the perfect choice to move this program forward.”

On top of coaching at KCKCC during the 2017 season, Kelly has also been very involved in player development at the club level. She is currently the Director of Player Development for Kansas Elite Soccer Club, and also trains athletes in the Kansas Olympic Development Program.

“I have discovered my passion for coaching by being surrounded by great coaches, all the way from my dad coaching me at a young age to my most recent mentor, Shawn Uhlenhake at KCKCC,” Kelly said. “I have been in excellent learning environments where collaboration was welcomed, which has helped me grow tremendously as a coach, and I’m excited to bring that passion to Avila University .”

A Kansas City native, Kelly helped lead St. Teresa’s Academy to three state championships in her four years, earning all-state and all-district honors in each of her final three seasons. Her play earned her a scholarship to Marquette University in Milwaukee, Wisconsin where she was a four-year starter for the Golden Eagles from 2005-2008, earning a trip to the Sweet Sixteen in her freshman campaign.

Kelly was named to the NCAA All-America Second Team as a senior in 2008 as a right defender, and she graduated from Marquette in the Spring of 2009 with a degree in public relations and marketing.

“I have been very blessed to play for as long as I did at the professional level. I’ve had many different coaches who imprinted on me their coaching style, tactics, and overall philosophy,” she said. “My experiences as a player have helped me stay diligent and open-minded no matter the situation, and I plan to take all those lessons and use them to make Avila the best program it can be.”

Kelly comes from a big soccer family, with her father Neil, ’85, playing for the Avila men’s soccer program from 1981-1985. Neil Kelly was a member of the 1982 men’s soccer team that won the program’s first NAIA District 16 Championship and placed fourth at the NAIA National Championships, finishing with an 18-5-1 record. Her sister, Maegan, currently plays for FC Kansas City and recently made her debut on the Canadian National Team, and her brother, Patrick, played one season at Avila in 2011 before transferring to Marquette.

Kelly’s mother, Shelley, ’87, played tennis at Avila and is now on the Avila University Board of Counselors.

“I have had many family members and close friends attend Avila, so I have always kept up with the changes and successes of the University. When the coaching position came open, I felt it was a great opportunity to mesh my passion for soccer and desire to be in a faith-based learning environment.”

Kelly will take over a program that has won just 13 games over the past four seasons after finishing 15-3-1 in 2013. She will also be leading the Eagles into uncharted territory as Avila University transitions from the Heart of America Athletic Conference to the Kansas Collegiate Athletic Conference beginning in July of 2018.

Katie is engaged to be married in December, and with that her name will change to Katie LaForge.