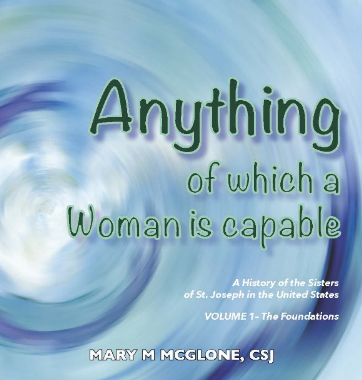 (November 29, 2017) KANSAS CITY, MO – Avila University will host a book signing for historical theologian S. Mary McGlone, CSJ and her new book “Anything of Which a Woman Is Capable” on Tuesday, November 5 on the campus of Avila University. The book signing will take place at 4:00 p.m. in the Hooley-Bundschu Library and Learning Commons.

McGlone is a Sister of St. Joseph of Carondelet and a former Avila professor. She has ministered in the United States and Peru and done short-term mission work in El Salvador, Ecuador and Romania. She holds a Ph.D. in Historical Theology. Other publications include “Sharing Faith Across the Hemisphere and Comunidad Para El Mundo: The History of the Sisters of St. Joseph of Carondelet” and “The Vice Province of Peru.” S. McGlone also writes for the National Catholic Reporter, among other periodicals.

“Anything of Which a Woman Is Capable” outlines the history of the Sisters of St. Joseph in the United States. In 1834, after nearly 200 years as a religious community in France, Bishop Joseph Rosati of St. Louis, began seeking assistance from the Sisters of St. Joseph for his poverty-stricken diocese, and he especially wanted the sisters to open a school for the deaf. Six valiant nuns crossed the Atlantic in January of 1836 and settled in St. Louis. S. McGlone’s book begins with their arrival in America.

Avila University is founded and inspired by the Sisters of St. Joseph of Carondelet.

There is no charge for attending the book signing, but a reservation is encouraged by notifying David Armstrong, Avila’s Director of University Mission and Ministry at david.armstrong@avila.edu.