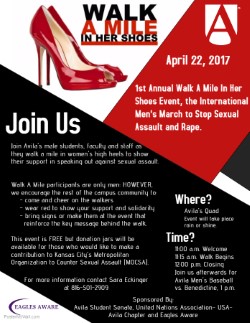 Avila will host the first Walk a Mile in Her Shoes event on Saturday April 22 beginning at 10:30 a.m. on the campus of Avila University.

Overwhelming evidence indicates that the majority of sexual assaults are perpetrated by men against women. However, most men are not perpetrators. For decades men have been left out of the equation of violence prevention and the elimination of sexual assault. Sexual violence affects everyone and it is everyone’s responsibility to help put a stop to it. Men play a very crucial role in sexual violence prevention.

Sara Eckinger is the program coordinator for Eagles Aware at Avila and sees sexual assault as an issue that goes beyond gender. “We know that men, in partnership with women, play a crucial role in ending gender-based violence,” Eckinger said. “At Avila we believe it’s critical that men’s voices are brought into the mix to expand prevention efforts and to help the next generation of young men foster attitudes that promote healthy relationships, equality and respect.”

Walkers will check in on the purple brick outside of Blasco Hall at 10:30 a.m. and will walk a one mile route around the campus beginning at 11:00 a.m.