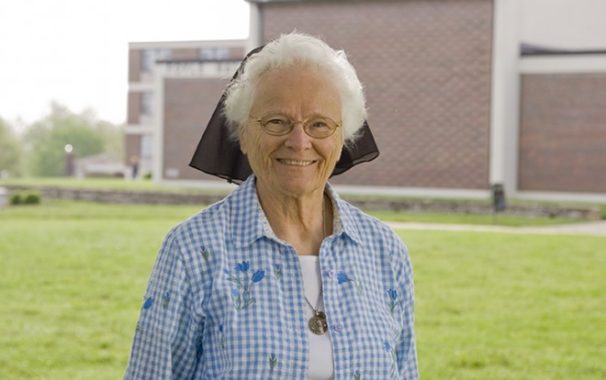 On December 1, 2016, Kansas City lost a leader in education, faith and fundraising with the passing of Sister Olive Louise Dallavis. She was 95. Serving as the president of Avila University for 24 years, S. Olive Louise cultivated the advice, friendship and donations from Kansas City’s business elites at a time when women weren’t typically involved in her position. “In the 60’s and 70’s, not many women were out there asking businessmen for money,” said S. Olive Louise in a 2009 interview. “For that matter, not many women were college presidents.”

Olive Louise was a pioneer on many fronts and held numerous honors and awards.

But it was her love for Avila University and its students that created her most lasting legacies. This year marked the 40th anniversary of Avila’s Steer Dinner and Auction. Started by S. Olive Louise when the university was gifted an American Royal Grand Champion steer, the Steer Dinner has become one of Kansas City’s oldest charity galas raising millions of dollars in student scholarships.

The SOLD scholarship fund, named from her initials, has raised more than $9 million for student scholarships since it began as a result of her leadership and legacy.

Baptized Meri Tulia Dallavis in St. Louis, in 1921, S. Olive Louise entered the Sisters of St. Joseph of Carondelet in 1938. She received her bachelor’s degree from Fontbonne College and a master’s degree in music from the University of Illinois, Champaign. S. Olive Louise moved to Kansas City, Missouri, in 1952 and began teaching at the College of St. Teresa.

By 1961, plans began to move the college campus to its current location in south Kansas City. When the college’s president was diagnosed with leukemia, S. Olive Louise – the youngest faculty member on the staff – was named acting president. “I was never afraid of taking on the role,” said S. Olive Louise in a 2009 interview.

Within her first year as president, S. Olive Louise oversaw the college’s move and construction, and under her leadership the College of St. Teresa changed its name to Avila College. A hands-on leader, in the early days S. Olive Louise made minor repairs around campus, met with donors, cooked meals, mowed the grounds and slept in a chair bed in the new administration building.

S. Olive Louise was the longest acting president, serving until 1985. Under her leadership Avila grew into the modern university it is today. More than half of the campus facilities were constructed during her presidency; Avila became co-educational and athletics were introduced. Dallavis Hall was named for S. Olive Louise in 2000.

“Sister Olive was an icon in the Kansas City region that will be remembered for her bold and fearless leadership, devotion to her faith and dedication to Avila.  She was visionary in recognizing that to be successful, Avila needed to relocate to south Kansas City.  She recognized the importance of reaching out and serving adults and non-traditional students at a time when few were doing so.  It was part of her commitment to ‘serving the dear neighbor without distinction’ by recognizing where the greatest need to enhance learning rested,” said Ronald Sleptiza, Ph.D., CSJA and current Avila University president. “We remain guided by this vision and committed to these values.  In this sense, it is her greatest legacy.”

S. Olive Louise remained actively involved on campus until her retirement in 2009 helping Avila’s advancement department raise funds. Upon her retirement she was named president emerita.

In 2016, S. Olive Louise celebrated her 75th Jubilee as a Sister of St. Joseph of Carondelet. She resided at Nazareth Living Center in Oakville, Missouri where she continued to carry out her ministry of prayer and witness until her passing.