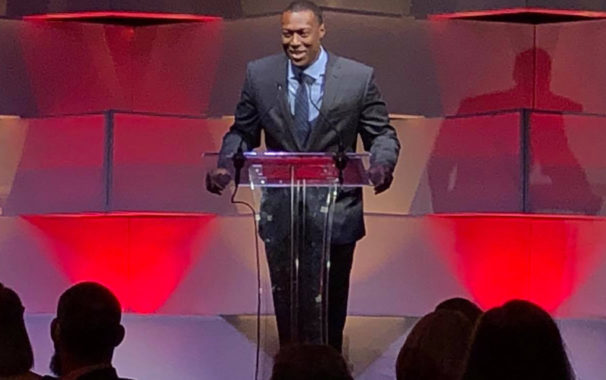 For the sixth consecutive year, Avila University raised more than $1 million toward student scholarships during an energetic 44th annual Steer Dinner and Auction on February 1 at the Kansas City Downtown Marriott.

Impactful speeches and a video emphasized the importance of the evening for students who have the opportunity to receive a higher education thanks to the generosity of donors. Students such as Chijioke Eguzo, a senior from Austin, Texas, majoring in computer science, who spoke about the difference Avila has played in his life.

“Growing up in Texas, I always wanted to play college football,” Equzo said during his speech. “When one of the coaches at Avila offered me academic and athletic scholarships, my family was ecstatic. Avila created a reasonably affordable way for my family and me to pay for my higher education. Once I took the campus tour and experienced the friendly environment, and of course the football field, I knew Avila was where I wanted to be for the next four years.”

In addition to celebrating the Avila Family, nearly 600 alumni, Sisters of St. Joseph, friends, faculty emeriti, faculty, staff members, students and friends of the University showed up in their finest red and gold attire to celebrate the Kansas City Chiefs the evening before their win in Super Bowl LIV. Marquee letters stating “Avila <3 the Chiefs” welcomed guests and the entire evening was Chiefs-inspired, from the red and gold lighting and table settings, to the many unique pieces of Chiefs memorabilia being auctioned. Event chairs Greg Kratofil, Jr. and Kristin Kratofil even shared a video message with the audience from Miami where they attended the Super Bowl.

In addition to the Kratofils as this year’s event chairs, Tricia ’00 and Kevin Lyon were the honorary chairs. Fox 4 morning anchor Mark Alford served as master of ceremonies for the event, bringing new energy to the event.

The Steer Dinner and Auction began in 1977 with the receipt of an American Royal Grand Champion steer to the University. S. Olive Louise Dallavis, CSJ, president emerita and founder of the Steer Dinner, used the gift to begin a fundraising effort that has raised more than $14 million in scholarship money.