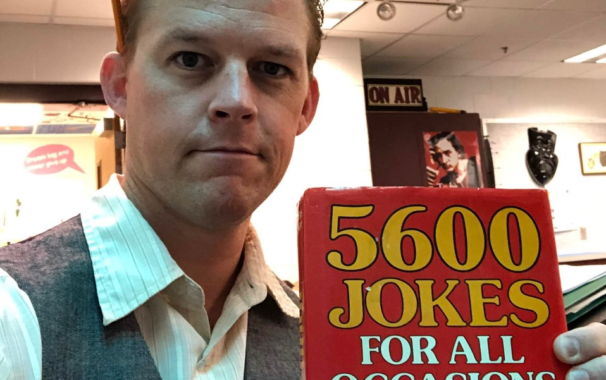 After more than a decade of acting and serving tables during the evenings in order to help raise his daughter, a chance encounter with a graduate of Avila University’s Master’s + Certification program changed his life.

“I was taking care of my daughter during the day while my wife was at work and serving tables in the evening,” he said. “Serving tables was great because I met loads of people, and one day a customer had been through the Avila program and told me that I should check it out.

“I juggled it around in my head for a little bit – around a year – but I finally made the decision that I was going to do it. I completed the program and got certified in May after only two years. The entire experience was fantastic.”

Maasen is now teaching theatre and modern communications at Oxford Middle School in Overland Park, Kansas in the Blue Valley School District, an outcome that he still can’t quite believe.

“It’s my dream job and I still pinch myself to make sure it’s actually happening,” he said. “I knew I wanted to do something with kids that would use my knowledge and experience of acting. Not only am I teaching the content I’m passionate about, it’s the school district I wanted to teach in. The connections I made at Avila played a huge role in my landing here.”

Avila’s Master’s + Teacher Certification program empowers students like Maasen who are considering a career pivot to obtain their master’s of arts in education (M.A.Ed.) degree after only two years in one of four concentrations: elementary, middle, secondary or special education. After completing the program, students will also earn their initial teacher certification in Missouri or Kansas. The program is designed to help students become capable, certified teachers as quickly as possible, according to Cory Roup, M.S.Ed., assistant director of Graduate Education.

“After only one year, students are in the classroom student teaching and getting hands on experience which is pretty unique for programs in the area,” Roup said. “Our course selection and content allows students to get the knowledge they need to get into the classroom and succeed.”

Even after Maasen elected to begin the program, he had a few anxieties. He worried he might be too old to be starting a new degree program because he had completed his bachelor’s degree more than a decade previously. Even though he had extensive professional experience in different areas, his time away from school gave him pause when he entered the classroom for his first course at Avila.

“I thought I was going to be one of the oldest in the classroom and I worried that I would feel awkward and out of place,” he said. “It had been over 10 years since I had been in school and I was terrified to get back into it. So when I walked in for my first day feeling nervous, there was already one other person in the classroom and we were the same age. After I met them I was relieved and surprised to know that the classroom was going to be very diverse age-wise.”

Maasen shone once he began his coursework according to Roup, who served as the former’s academic adviser.

For his part, Maasen credited the hands-on role his professors continue to play in his education.

“My professors will go above and beyond to help in any way they can,” he said. “I’m still in touch with them and I’m able to contact them for anything. They were especially key in that first year because it’s a very challenging time. They were there for me as a mentor, friend and even just a soundboard.”

As he settles into his new career as a middle school teacher, Maasen continues to credit the impact Avila made in allowing him to pursue his passions.

“The program works and you can have a lot of success if this is really what you want to do,” he said. “You can make those connections and really find out if this is going to be a good fit for you. The way the program works, they really throw you in the deep end. But they give you plenty of opportunities to say ‘Yep, this is really what I want to do.’”