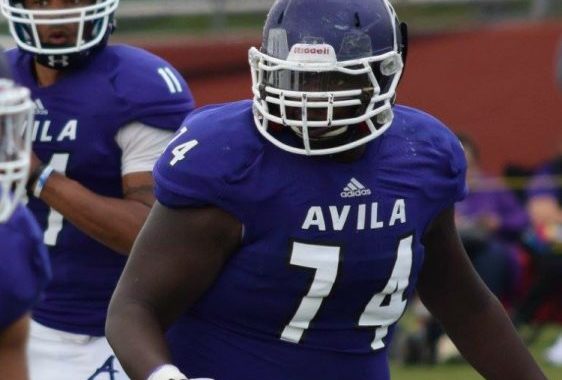 Avila University offensive lineman, senior Shabari Jones, has been named to the American Football Coaches Association (AFCA) All-American first-team for 2018. The AFCA has selected an All-America team since 1945 and currently selects teams in all five of its divisions. What makes these teams so unique is that they are the only awards chosen exclusively by the men who know the players the best — the coaches themselves. This award is the first AFCA All-America honors for the University.

“I don’t think this award could have gone to a greater person or player,” said Avila Head Coach Marc Benavidez ’12. “Shabari has demonstrated everything we would want in an Avila football player. He’s a guy that does the little things right and has put in the hard work and effort ever since the first day he reported to school as a freshman. It’s an extremely proud moment to see him accomplish his dreams as he grew and developed into an amazing young man and football player.”

By being named first-team All-American, Jones is considered to be one of the top five best NAIA offensive linemen in the country. The AFCA’s NAIA All-America Selection Committee is made up of three head coaches from each of the AFCA’s seven districts, one of whom serves as a district chairman, along with another head coach who serves as the chairman of the selection committee. The coaches in each district are responsible for ranking the top players in their respective districts.

Jones is redshirt senior from Lee County High School in Leesburg, Georgia. In 2017 he was voted as the Avila Offensive MVP and was named by the Heart of America Athletic Conference as an All-Conference player. This year Jones became the first offensive lineman to earn a unanimous selection to the Kansas Collegiate Athletic Conference first-team. Voted a captain by his teammates, he played and started at every position along the offensive line. Jones was a key piece for an offense that broke numerous school records this season.

“Coach Benavidez ran his offense with such singular focus, and so much of that starts on the ‘O-Line,’” said Avila University Athletic Director Cristina Cowan ’10, ’15. “This final end-of-season award is such an exclamation mark on a record-breaking year.”

Behind a high-flying offense and a defense that specialized in turning over the opponent, Avila broke numerous school records on both sides of the ball in 2018, including most yards from scrimmage (4,668), most yards per game (466.8), most touchdowns (49) while allowing the fewest yards as a defense since the 2011 campaign. The Eagles finished 7-3 and cracked the NAIA Football Top 25 for the first time in program history, climbing as high as number 21 in the poll.