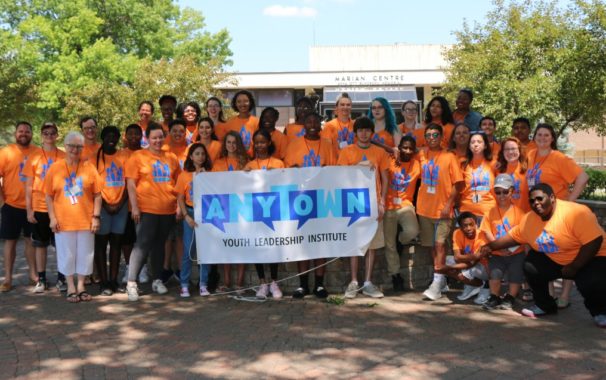 This summer, incoming high school sophomore, junior and senior students representing 20 different high schools around the Kansas City metro were present at the 2018 Anytown-KC camp hosted by the Buchanan Initiative for Peace and Nonviolence at Avila University.

Anytown-KC is a five-day residential program for high school youth who are interested in learning about social justice issues and practicing their leadership skills. The goal is for students to return to their high schools and use the skills they developed through Anytown to help make their communities more inclusive. During the program, they participated in facilitated dialogue groups, workshops, and experiential activities around campus to better their understanding of themselves and to develop newfound respect for others. The program’s purpose is to inspire a young generation of leaders who are willing and ready to dismantle privilege and oppression in their many forms to create more just and inclusive communities.

Arica Maurer, coordinator for the Buchanan Initiative for Peace and Nonviolence said, “We hope to partner with Anytown-KC in the years to come and provide a long-term home for the program on Avila’s campus. Anytown-KC provides a space for dialogue among young members of the Kansas City community, furthering the Buchanan Initiative’s mission to elevate the voices of the marginalized and build positive sustainable relationships.”

The program was led by two co-directors: Cecilia Ananya Belser-Patton and Sandra Yoder, with a large staff of volunteers who led the breakout groups, handled logistics and provided feedback on the process. The Anytown-KC camp was organized in such a way that students would be exposed to participants unlike themselves. The composition of participants reflected diversity in race, ethnicity, sexual orientation, gender identity, religious belief, political belief, socioeconomic status, immigration status and ability. Students who came from the same neighborhood or who had any known personal connection to other participants or staff were intentionally put in different small groups.

For incoming Belton High School senior, Samantha LeValley, this was her first time participating in the Anytown-KC experience. “Through the interactive activities at Anytown-KC, I was able to see the differences that we don’t always see.”

LeValley also said, “After every activity, our group made a small commitment to fight oppression. What I have taken away from Anytown-KC is the importance of being careful about your inclusive language. This has been an important experience and one of the best experiences of my life.”

Henry “David” Manning, an incoming sophomore from Olathe High School, believes that Anytown-KC has given him the opportunity to help others to better deal with oppression.
“I’m looking forward to taking the Anytown-KC principles back to my school this fall,” said Manning.

With these social justice principles of acknowledgement, empathy and action under their wings, these 22 Anytown-KC young leaders are now inspired to move their communities towards social justice.

Originating in the 1950s, Anytown is a program that works with adolescents at a pivotal age to empower them to break down the barriers and systems of oppression. Anytown-KC receives financial support from the National Conference for Community and Justice (NCCJ) St. Louis, a 501(c)(3) organization. In 2017, Anytown-KC was brought back to Kansas City by a small group of committed former staff and volunteers including Dr. Sheryl Stewart, a retired English teacher and professor at Central Baptist Theological Seminary. The group enjoyed widespread support from Anytown alums and friends in the area and beyond. Though Anytown-KC is a one-week long residential camp, the steering committee hopes to eventually turn Anytown-KC into a year-round network of support and opportunities for students who are inspired to work for justice in their schools and neighborhoods.

The Buchanan Initiative for Peace and Nonviolence (BIPN) engages Avila’s academic community and stakeholders throughout the region to interrogate harms and injustices, elevate the voices of the marginalized, and apply methods for building positive sustainable relationships. The Buchanan Initiative brings students, academics, and activists together to raise a generation that has the nonviolent tools it needs to make peaceful social change possible.