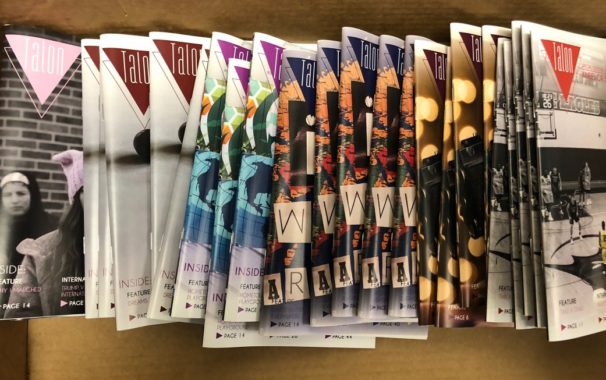 The Talon won top prize as the best overall news publication for 2017-18.  The Talon also swept the special issue competition winning both first and second place awards for its “Kneel or Stand” Issue and for the “We March On” Issue.

In addition, the Talon won third place for its “Goodbye Jessica“ photo story; honorable mention for sports media photo “The Pass “by Talal Alaseeri, and honorable mention in video for “Defending Kapernick” by Karis Pruitt.

Avila’s Talon has historically done well at the MCMA awards having won 14 individual awards in 2017, nine in 2016, and 11 in 2015, but never before has it been awarded the best overall news publication and special issues competition.

The awards provide evidence of The Talon’s sustained excellence across all spectrums in journalism – writing, photography, advertising, illustration, and publication design.

“It is highly unusual and particularly delighting to have taken the best overall publication and at the same time winning the top two spots in the special issue category,” said J. Anthony Snorgrass, Ph.D., professor of communications, and The Talon’s faculty advisor. “These categories are extremely competitive, but the real significance of this year’s awards is that it represents the full spectrum of the entire team’s work.”

“This year’s awards are extra special because the team continued to shy away from typical newspaper style coverage to include more essay and editorial content representing actual student voices,” Snorgrass continued. “Talon’s distinct format, look, and feel continue to stand out among the competition.”