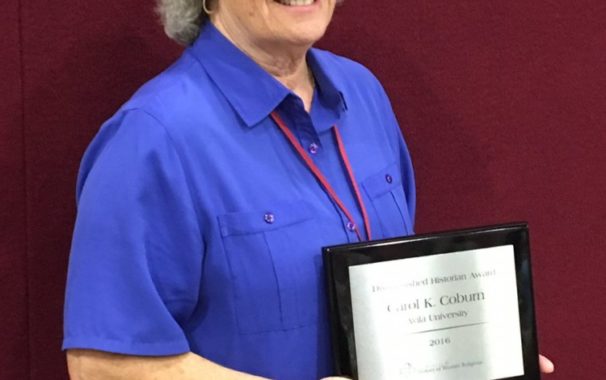 (June 27, 2016) KANSAS CITY, MO – Dr. Carol K. Coburn, professor of Religious Studies and Women’s and Gender Studies at Avila University has received the 2016 award for Best Essay in a Scholarly Magazine from the Catholic Press Association. Her paper entitled, “Ahead of its Time … Or, Right on Time? The Role of the Sister Formation Conference for American Women Religious.” The essay appeared in American Catholic Studies, the oldest, continuously published Catholic Scholarly journal in the United States.

Judged on depth of reflection, persuasiveness and use of examples, Coburn tied for first place with William Issel and his essay entitled “Peace and Justice: Bishop Mark J. Hurley and the San Francisco State College Strike.”

Coburn’s essay delves into the plight of Catholic sisters and of women religious in the years following World War II and leading up to the Second Vatican Council. The essay chronicles the birth of the Sister Formation Conference (SFC) and the struggle for women religious, Catholic educators and religious women across all American segments to gain an equal footing in matters of church policy.

In addition to the “Best Essay” award from the Catholic Press Association, Dr. Coburn also received the Distinguished Historian Award (2016) from the Conference on the History of Women Religious. The CHWR is a group of approximately 400 scholars and archivists from the fields of history, religious studies, women’s studies, and sociology. The majority of members reside in the United States, but international membership includes scholars from Canada, Australia, England, Ireland, Italy, Denmark, Norway, Belgium, France, Japan, and China.

Dr. Coburn is the director of the CSJ Heritage Center at Avila University. She has published and presented research on American Catholic sisters for over twenty years; most notably, she co-authored with Martha Smith, CSJ, “Spirited Lives: How Nuns Shaped Catholic Culture and American Life, 1836-1920” (University of North Carolina Press, 1999).